Pretty Much Says it All 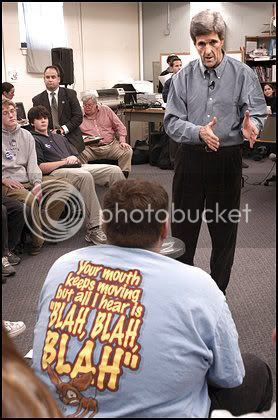 Before It's Too Late

Thought I'd share one of my favorite grilling recipes, while it's still warm enough to grill.

Bear in mind, this one is not very precise, I just kinda wing it. But here goes:

(For those not in the PNW, filbert=hazelnut, and you can use salmon instead of steelhead)

Mix honey and spices. Place the filets skin down, 2 to a plank. coat in honey mixture, sprinkle until coated with nut crumbs, saving about 1/4. Place on grill, cook until steelhead is firm but not quite done. As fish cooks, openings will appear in the nut crust. Use the extra nuts to fill spaces. When fish is almost done, remove from grill and place under red hot broiler for 1- 1.5 minutes, just long enough to finish toasting the nuts. Serve with mixed greens, mashed or pan fried potatos and a bottle of Pinot Noir.
Posted by B.B. at 9/03/2004 02:39:00 PM No comments:

We Ain't Talkin' About Fabric Softener!

Thanks for the Memory to Ace of Spades HQ.

During presidential elections, there is usually a phenomenon known as Bounce. The idea is, the momentum and publicity of a party's convention gives the party's candidate a boost in the polls.

This year, President Bush was struggling in the polls against Kerry in the days leading up to the DNC. It was predicted that he'd slip even further after Kerry announced the selection of Edwards as his running mate, it was an expected "Mini-bounce." It failed to materialize. Not to worry, folks! said the Donkeys. We still have the Convention! The DNC came and went, and guess what? No discernable bounce. But the Dem-wits had an explanation for this, too. There is no bounce they said, Neo-Matrix-Like. The electorate is so partisan, there aren't enough undecideds left to provide a bounce. Kerry didn't get one, and neither will Bush. Then came the RNC, and before President Bush even spoke, the polls tossed the Dimocrats this curveball:

One has to wonder what the bounce will look like after Thursday night.

This letter over at Marine Corps Moms prompted me to select the following quote for today:

"War is an ugly thing, but not the ugliest of things. The decayed and degraded state of moral and patriotic feeling which thinks that nothing is worth war is much worse. A man who has nothing for which he is willing to fight, nothing which is more important than his own personal safety, is a miserable creature and has no chance of being free unless made and kept so by the exertions of better men than himself."

UPDATE:
Thanks for the Memory to the esteemed Michelle Malkin.

If you follow the link I gave at the top of the post to Marine Corps Moms, you'll find it's a letter from the mother of a young marine, reacting to the protests in NYC, especially to the sight of protestors carrying coffins representing US Casualties. Well, Jen Martinez has another letter, this time from a soldier, expressing similar views.

It comes down to this, it would seem. The servicemembers and their families recognize that the protestors have the right to express their opinions. But they resent what they perceive as the protestor's lack of respect for the fact that it's those very soldiers, sailors, marines, and airmen whose sacrifices make possible the freedoms the protestors are exercizing. They resent being used as political pawns by the protestors, and they want people to know they don't agree with them. They volunteered willingly to serve, and serve is what they want to do.

Read the letters. Think about the words. And thank God Almighty he blessed us with people as noble as these servicemembers and their families.
Posted by B.B. at 9/03/2004 11:51:00 AM No comments:

One Dead President a Year Is Enough

Thanks for the memory to readers Chris W and USMT at the Rottie:

Apparently former President Bill Clinton may have suffered a heart attack and is undergoing bypass surgery.

I have little respect for the man as a political figure, and despised his presidency, but I would never wish him harm. If you read my earlier post, you know I speak from experience when I say that Chelsea's too young to bury her father.

Pray for him and his family, please.

OK, I ain't Glenn Reynolds, and this ain't no Instalaunch, but I do realize that my handful of loyal readers are a bright bunch and good judges of horseflesh, so to speak. So I'm telling you about one of your own.

Less than an hour ago, I got an email from reader Keith in Mt. View, asking permission to link to this blog from his. I was a bit amused, since I consider that the linker is doing the linkee a favor. But I respected the politeness, granted permission, and offered to return the favor if he'd send me his link. He complied, and I followed it, only to realize I'd been there, and liked what I saw. Then I notice only one of his entries has a comment, and it's from ME!!!!

A Little Piece of My Heart

I have developed a very weird habit in the last few years, for a specific reason. I suppose it's my little share of the world's insanity. To understand the habit, you need to understand its history.

In July of 2001, while preparing to move to Oregon, my wife and I were forced to live for some time in a very tiny 24-foot RV. One morning I was very ill, so I stayed home from work. The Redhead had things she needed to do to prepare for work, and was making a lot of noise, so I called my dad to ask if I could nap at my parent's RV for the morning. He said yes. Before I left, I decided to go for a little swim, I figured it would help me feel better. After that, my wife sent me on an errand. While on the errand, my father called to see when I would be there. My wife told him I'd be there soon.

I finished the error, then left our RV for my parents' RV park. When I got to the RV, my dad was sleeping in his favorite chair, a western novel he'd been reading still in his hands. I decided to wake him to let him know I was there.

Except he wasn't sleeping. He was dead. I called 911, administered CPR until the fire department arrived, and they tried for some time to revive him, but it was useless. He probably died instantly of a massive heart attack.

So this is the habit I've developed since then: Any time I wake in the night, and my wife or my dog is sleeping too soundly, I have a tendency to nudge them, just a bit, not enough to intentionally wake them completely, but enough to make them stir, just so I know they're actually just asleep. You can imagine how annoying this is to them. I'd been getting better about it, but with a baby on the way, I caught myself doing it to the dog several times last night.

I kid you not. I was in Fred Meyer last night, buying a birthday card for my nephew, when I saw them.

But they were funny.

First card:
Outside: Happy Birthday from President Nader
Inside: And the Easter Bunny, and the Tooth Fairy, and....

We Love You Too, New York

In the opening moments of his speech last night, Governor Pataki praised a group of Oregonians who travelled to NYC in the weeks after 9/11 to help sustain the NY tourism industry.

Well, we do understand how important tourism can be to a local economy. We would have difficulty surviving without it.