Thanks for the Memory to Tales of a Wandering Mind.

Quick, a bit of word association. Which mythological character springs to mind? 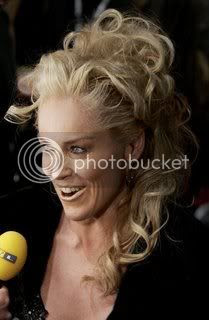 A while back I mentioned that Clear Creek Distillery's pear Eau-de-Vie had inspired me to start working on a dessert recipe. Well, last night I got my first try at it, and may I say, with all modesty, WOW! I think I have a winner here.

As usual, I was going for something that highlighted the food products of Oregon. I wanted a thematic dish -- I wanted the name and cooking method to reflect something about the state as mucvh as the ingredients. I decided to go with a flambe dish, something along the lines of Cherries Jubilee or Bananas Foster.

What I came up with was "Pears Mazama". Mount Mazama is the mountain in whose crater Crater Lake resides. It's a big mountain, but was much much bigger before that eruption some 7,000 years ago -- she went from 11k or 12k to just over 8k today. Pears are one of Oregon's top crops -- our largest tree-produced crop, #10 of all our crops, and we are #3 in US pear production, #2 in fresh pears (not canned). So it seemed a perfect match.

Tools you will need:
vegetable peeler
coring device (a melon baller will do)
shallow glass baking dish
medium skillet
ice cream scoop
ignition source (especially if, like me, you are stuck with an electric stove)
Fire Extinguisher (SERIOUSLY, folks. Don't dink around when it comes to flaming alcohol!)

Preheat oven to 375 degrees. Ever so lightly butter the bottom of a glass baking dish. Peel the pears, and with a corer or melon baller, core them. Not: Do not halve the pears, cut them, slice them, etc. They should be whole with the exception of the "tunnel" where the core used to be. Place upright in the baking dish and place in the oven for 15-20 minutes or until the pears are soft all the way through. Place each pear in the center of a plate (for the suggested presentation, a dinner plate gives the nicest effect). Place 1 scoop of vanilla bean ice cream next to the pear. Dust the entire plate with cinnamon. If you take care to dust from directly above, the pear will create a slight "shadow" around its base that gives a nice effect.

In a medium skillet combine the honey, sugar, water, and vanilla. Bring to a boil over medium heat, allowing the water to boil off. When the remaining mixture begins to caramelize, stir in the pear brandy. As soon as it comes to a boil, ignite it and pour over the pear, making sure as much of the sauce as possible gets into the core hole. when the fire dies out, sprinkle the pear and ice cream with chopped filberts and garnish with a mint sprig.
Posted by B.B. at 3/31/2006 06:30:00 AM No comments: