The place of business where The Feared Redhead works is just a short mile from the place where I work, so on pleasant days, I walk the distance instead of her picking me up here. With record-setting temperatures, yesterday was just such a day. The route passes the Eugene Country Club and an empty field before reaching Oakway. Yesterday, as I walked the route, my olfactory senses were aroused by a scent that was at first hauntigly familiar, but which, when recognized, ravished my memory with a flood of old sensations.

The blackberries are in bloom.

Most Oregonians will readily admit to being absolute blackberry fiends. They grow as weeds here, and the hybrid Marionberry (not to be confused with Marion Barry)was developed here in Oregon, up in, of course, Marion County. I am no different. I am addicted to them.

Growing up in southern Oregon, I loved to pick blackberries as much as I loved eating them. In part, that is because eating blackberries is a significant protion of picking them. For ever berry that hits the bucket, usually two manage to reach the bucket's escape velocity, only to be inexorably pulled in by the gravitational forces of your mouth.

And eating blackberries, especially right off of the plant, is, if you'll pardon the expression, quite a sensual experience, almost erotic. The buxom fullness of the berries, the flood of juices as you devour them, the alternating tartness and sweetness of berries of varying degrees of ripeness. Eating blackberries is not a casual experience. And the atmosphere of picking them adds to this -- the silence of a remote country berry patch, disturbed only by the droning hum of bugs and the occasional call of a bird, the soaking heat of the sun, the sudden chills as you step into the shade and the wind picks up. Picking blackberries involves all the senses, you find yourself sleepy and aroused and hungry and sated all at the same time.

Not being a pure libertarian, I tend to shy away from using the hyperbolic phrase Nanny State. But considering this news story from the BBC, sent to me by a coworker, I’m making a prediction as to who will be the next Prime Minister of Great Britain: 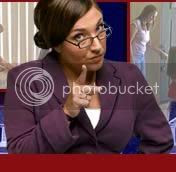 A&E doctors are calling for a ban on long pointed kitchen knives to reduce deaths from stabbing.

A team from West Middlesex University Hospital said violent crime is on the increase - and kitchen knives are used in as many as half of all stabbings.

They argued many assaults are committed impulsively, prompted by alcohol and drugs, and a kitchen knife often makes an all too available weapon.

The research is published in the British Medical Journal.

The researchers said there was no reason for long pointed knives to be publicly available at all.

They consulted 10 top chefs from around the UK, and found such knives have little practical value in the kitchen.

None of the chefs felt such knives were essential, since the point of a short blade was just as useful when a sharp end was needed.

The researchers said a short pointed knife may cause a substantial superficial wound if used in an assault - but is unlikely to penetrate to inner organs.

In contrast, a pointed long blade pierces the body like "cutting into a ripe melon".

The use of knives is particularly worrying amongst adolescents, say the researchers, reporting that 24% of 16-year-olds have been shown to carry weapons, primarily knives.
The study found links between easy access to domestic knives and violent assault are long established.

French laws in the 17th century decreed that the tips of table and street knives be ground smooth. [

A century later, forks and blunt-ended table knives were introduced in the UK in an effort to reduce injuries during arguments in public eating houses.

The researchers say legislation to ban the sale of long pointed knives would be a key step in the fight against violent crime.

"The Home Office is looking for ways to reduce knife crime.

"We suggest that banning the sale of long pointed knives is a sensible and practical measure that would have this effect."

Home Office spokesperson said there were already extensive restrictions in place to control the sale and possession of knives.

"The law already prohibits the possession of offensive weapons in a public place, and the possession of knives in public without good reason or lawful authority, with the exception of a folding pocket knife with a blade not exceeding three inches.

"Offensive weapons are defined as any weapon designed or adapted to cause injury, or intended by the person possessing them to do so.

"An individual has to demonstrate that he had good reason to possess a knife, for example for fishing, other sporting purposes or as part of his profession (e.g. a chef) in a public place.

"The manufacture, sale and importation of 17 bladed, pointed and other offensive weapons have been banned, in addition to flick knives and gravity knives."

A spokesperson for the Association of Chief Police Officers said: "ACPO supports any move to reduce the number of knife related incidents, however, it is important to consider the practicalities of enforcing such changes."

Wait a minute. Let me get this straight. In the United Kingdom, which has some of the most stringent gun control laws on the planet, violent crime is on the increase??? But… but… I thought guns were the cause of violence!!!

No, I’m afraid you were mistaken. Guns don’t make people more violent, they make violent people more efficient. In fact, that’s the object of any weapon. I believe the root of the Greek words for tool and weapon are the same, because that’s what a weapon is – a tool for violence, a “Force Multiplier”, if you will. Humanity has been committing acts of violence as far back as we can remember. As soon as we realized that we could use tools to make our work easier, I suspect it was about twenty minutes before one of our ancestors realized, "Hey, this makes folks easier to KILL, too!" Ever since, we've just kept getting better at it (or worse, depending on your point of view). And I'm sure that even without handy death gadgets, we'll still find other means. Ban our guns, people will use knives. Ban the knives, it'll be clubs. Pretty soon, we'll live in foam-padded societies equipped only with KFC sporks, and we'll still be using those to gouge out eyes. Violent nature begets weapons, not the other way around.

The second idea put forth here to which I strenuously object is this:

The researchers said there was no reason for long pointed knives to be publicly available at all.

They consulted 10 top chefs from around the UK, and found such knives have little practical value in the kitchen.

None of the chefs felt such knives were essential, since the point of a short blade was just as useful when a sharp end was needed.

I've heard the same comment put forth by those who argue that certain types of guns should be banned because "You don't need automatic weapons to hunt deer".

First of all, people who sday that have never seen some of the people I grew up with. Their shooting was so bad, the only chance in hell they had of bagging game was to lay down volumes of fire vaguely reminiscent of Omaha Red.

But removing my tongue from my cheek, this is where I do agree with true libertarians. "Because you don't need it" is not a valid reason to ban something, nor should it even be part of the equation with regards to adults. There's a saying that expresses the fear of many with regards to this attitude by the state, and it goes something like "What is not required will be outlawed". Frightening prospect. But it seems to be where our society is heading: Abrogating free will and personal responsibility; entrusting the State with the power and duty to make our decisions for us. Protect us from ourselves, we seem to be saying.