They moved my brother-in-law out of the ICU this weekend into a regular hospital bed. They may release him as early as this week. The doctors have been amazed by his progress. Thank you all for your support.
Posted by B.B. at 3/06/2006 08:03:00 AM No comments:

I took some pictures yesterday using my camera phone. They're a bit fuzzy (I really need to get a digital camera), but I hope you enjoy anyway.

'Twas a busy weekend indeed, but ofr once, a fairly enjoyable one. Saturday started out as normal -- I dropped The Feared Redhead off at her work, then stopped at Dutch Brothers on my way home for my traditional Saturday Morning Latte'. The Lad, the Laundry, the Dishes, and the Vacuuming kept me busy the rest of the day -- no time to go shopping for dinner. So my idea was to stop at the Fish Merchant (our local fishmongers) to pick up something for dinner after picking up TFR. I ficured I could grab some shrimp or fish to cook. Fate was to intervene, this time on our behalf. When we pulled up to the shop, we saw that the giant stainless steel gas-fired kettle out front was steaming away. This time of year in the Pacific Northwest, that means only one thing -- Dungeness! That night, crab sat happily in our tummies that had just that very day met their maker. I also picked up some pre-shelled meat, and later this week plan to try my hand at Dungeness Ravioli with a Filbert Pesto.

Sunday Morning, while TFR and the lad slept in, I got the grocery shopping done for the rest of the week. Then, we headed out for a day in the country. We live only a couple of miles from one of the most scenic roads in America -- Highway 126. To the west of Eugene, it makes its way over the Coast Range to the Oregon Coast at Florence. To the east, it heads up into the Cascades along the McKenzie River: 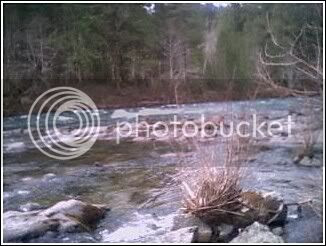 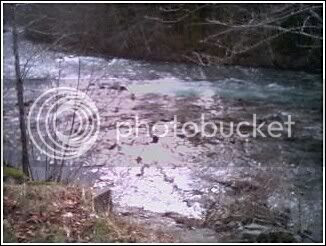 This time of year is a great time to see the small waterfalls along the way. We stopped at one to take the above pictures and some of the waterfall itself: 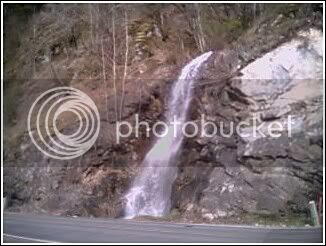 after running under the road it fed into the river: 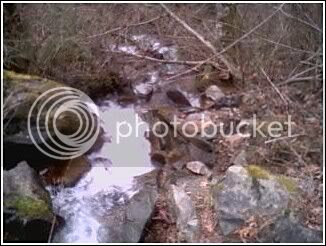 On the way home, we saw some beautiful views of Mt. Washington and Three-Fingered Jack, but the clouds didn't provide enough of a contrast to get a good shot. The most beautiful view of the day was of a smaller mountain we past as the sun was setting. We, most of that mountain, and the other mountains around it were in shadow. But one snow-covered, bare, rocky slope faced to the west, and the setting sun lit the high points of the slope, painting them with a fiery golden color that was just gorgeous. The following picture doesn't do it justice: 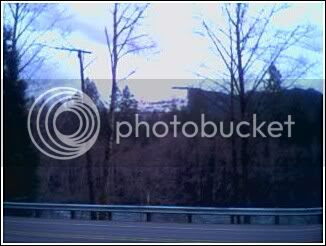 Soon after that, we decided to stop to grap a pop. This is where the story gets weird, but in a cool way. We pulled off the road in Blue River, a small town just off the highway that is about 3 blocks long by 2 blocks wide. We pulled into the gas station about 10 minutes before it closed (at 6 PM), and parked in front of an old school bus (a 1950 White) that I call "That's Far Enough" (Kudos to anyone who gets why that's appropriate for the Eugene area): 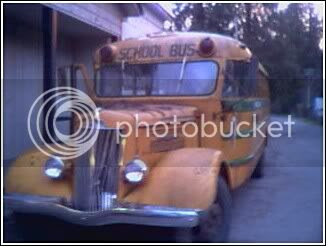 The gas station's selection of beverages was quite limited, and it took me several treks to the car to figure out what TFR wanted to drink. It took longer when I had to use the restroom. In the meantime, TFR let Little Big Dog out to potty. When I returned to the car, TFR was standing out in the street, and said to me, in an excited voice, "Brian, come here, you have to see this!" I went to see what she was talking about. There, on the side of the bus: 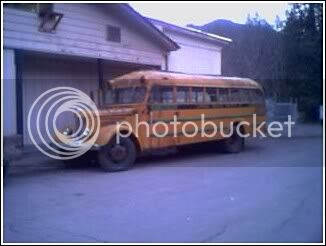 Were the words "Lorane School District 36". Lorane is a small town SW of Eugene where my father spent his teenage years. In those days, it had its own high school, but nowadays kids in Lorane go to High School in Crow.

When we got back into town and cell coverage, we called my mom, then my uncle. It turns out that Lorane HS had three(!) buses, and the bus we saw in Blue River was the very bus my father and uncle rode to school every day during their high school years. The sense of connection was really neat, and a little eery.
Posted by B.B. at 3/06/2006 06:07:00 AM No comments: