This is just weird.

I know how my Blog made the Google Search.

The Devil's Brigade of Blogging

I know, I’ve been as guilty as any other American, especially of any other American conservative, of being mildly derisive of Canada. And let’s be honest – every country has its drawbacks, every country on Earth provides the rest of the world with material for jokes. Being next door to Canada, it’s easy to notice the specks in their eyes. I’ve oft repeated the joke that “The tragedy of Canada is that it had a chance to end up with French Cuisine, English Culture, and American Technology, but ended up with English Cuisine, American Culture, and French Technology”. It’s noteworthy that the originator of the quote is purported to be a Canadian.

And I’m no fan, obviously, of their government or its policies.

But on a personal level, I find Canadians to be some of the nicest, most generous, and sincerest people I’ve ever met. The only unpleasant interactions I’ve had with Canadians were work-related, and in my line of work, that’s to be expected. Growing up in the Rural West, there was an attitude that we had more in common culturally with Western Canadians than with East Coast Americans.

And despite the current dismal state of their military, that is in no way a reflection on the quality of the Canadian as a fighting man. Throughout their history, especially in the World Wars, Canadians proved themselves to be brave, fierce soldiers, and good allies to have at your back – although given their enthusiasm, you had to move fast to keep them behind you.

And they have proven particularly adept at fighting alongside us “Yanks”. Case in point is the “Devil’s Brigade” after which this post is named. In Afghanistan, a Canadian Sniper took out a Taliban target at a range of over 1 mile, saving the bacon of American Soldiers.

And so it’s with great admiration and friendship that I commend to you the Red Ensign Standard, a group of politically conservative Canadian Bloggers fighting the good fight in and for their beloved homeland. Go give them a read and your support. 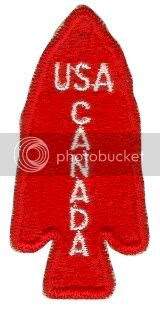