For all my loyal readers and fellow bloggers, many of whom I consider friends I've not yet met, I appreciate the fact that you've stuck with me through a very tough, very busy term. Things aren't over just yet -- I have a final later today and one tomorrow -- but I can see light at the end of the tunnel, and have some reason to believe it's not an oncoming train, though heaven knows I feel like I've been hit by one. Getting a bad chest and head cold the week of finals sucks.

At this point I don't have any work lined up for the break, so I may be able to blog a bit more often than normal. I kinda look forward to that.

But there's been some ups lately too. In my Menu Management class, I got an A on the rough draft of my project, up from a C on the proposal stage. It consisted of a menu for a fictional restaurant, including 5 appetizers, 6 entrees, 3 desserts, and 5 beverages, plus recipes, costing, and prices for all items.

I also did well on the final combined project for my Garde Manger class and Buffet & Banquet class. Early on in the term, we were split into teams of two and given an hor d'oeuvre to test. Then we were informed that at the end of the term (last week), we'd be making 200 portions of our hors d'oeuvre for an open house at the school. My partner and I got off to a rocky start. We were assigned smoked trout mousse, and had to decide for ourselves what sort of hors d'oeuvre to make out of it. The test run used trout that had been smoked in an earlier lab by the whole class, and the mouse recipe right out of the book. It sucked. It was way too salty and smoky and runny. But hey, we had half a term to fix it, right?

Chef Clive, my instructor, hit one one part of the solution to our problem -- the trout itself wasn't that good to begin with. I also decided that the other part of the solution was to increase the aspic gelee (gelatin flavored with stock consommee, in this case fish stock) and whipped cream in the recipe, for more body and firmness.

Then my partner dropped out of the program, so it was all on me. The only major help I got was when some classmates threw together the dough for my bread.

So last week, while also dealing with my regular class load, I came in between classes and smoked the trout and baked off my bread. The trout was a smashing success -- part of the solution was a sweeter brine, the other part was to use a milder smoke -- the original had been smoked in hickory, which while fine for barbecue, is too strong for something as delicate as trout. Instead, I used a combination of alder and apple. The bread also cooked off perfectly.

The day of the event, I was at school at 9:30, worked through until plating at 3:00, and produced a hit: smoked trout mousse canapes on toasted brioche, garnished with a dill sprig and a slice of radish soaked in white wine. They were divine. The wine was the first thing to hit your mouth. The acid in the wine softened the bite of the radish, but also cut some of the richness of the mousse, which was perfectly smooth and firm, with a salty sweet smokiness. The brioche was slightly crips, and its butteriness added to the mouth feel from the mousse.

One of my chef instructors took a picture, as soon as she emails it to me, I'll post it to the blog. 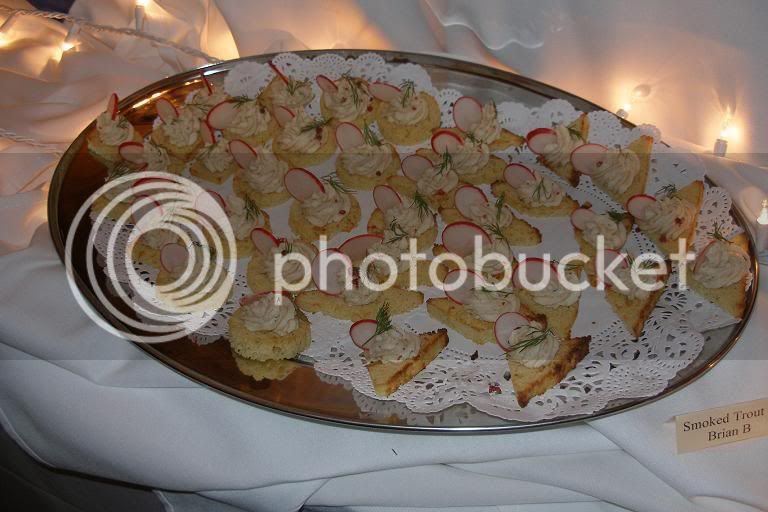 Section 1. The eighteenth article of amendment to the Constitution of the United States is hereby repealed.
Section 2. The transportation or importation into any State, Territory, or possession of the United States for delivery or use therein of intoxicating liquors, in violation of the laws thereof, is hereby prohibited.
Section 3. This article shall be inoperative unless it shall have been ratified as an amendment to the Constitution by conventions in the several States, as provided in the Constitution, within seven years from the date of the submission hereof to the States by the Congress.
Ratified December 5, 1933
Thus ended one of the (if not THE) biggest, costliest, and most tragic experiments in Nanny State governing in the history of this country. So this evening, pourt yourself a stiff drink, and raise a glass to freedom.
Posted by B.B. at 12/05/2007 09:35:00 AM No comments: