Well, with the fall weather getting cool, I decided it's time to post a recipe that matches the weather.

This is a variation on Beef Bourgognon that I developed to highlight as many Oregon food products as possible. Anywhere I've listed an Oregon ingredient, you can use your local equivalent.

Cut the leaves off of the celery. Finely chop the leaves and the stalks, but keep separate.

Heat the oil in a large Dutch oven. Add the bacon and cook over medium heat for 10 minutes, stirring occasionally, until the bacon is lightly browned. Remove the bacon with a slotted spoon to a large plate.

Dry the beef cubes with paper towels and then sprinkle them with salt and pepper. In batches in single layers, sear the beef in the hot oil for 3 to 5 minutes, turning to brown on all sides. Remove the seared cubes to the plate with the bacon and continue searing until all the beef is browned. Set aside.

Toss the carrots, celery stalks, and onions, 1 tablespoon of salt and 2 teaspoons of pepper in the fat in the pan and cook for 10 to 15 minutes, stirring occasionally, until the onions are lightly browned. Add the garlic and cook for 1 minute. Put the meat and bacon back into the pot with the juices. Add the bottle of wine plus enough beef broth to almost cover the meat. Add the myrtlewood leaf, rosemary, celery leaves, and the rest of the thyme. Bring to a simmer, cover the pot with a tight-fitting lid and place it in the oven for about 1 1/4 hours or until the meat and vegetables are very tender when pierced with a fork. Put the potatoes in the oven at the same time as the Dutch oven.

To serve, spoon the stew over the potatos and garnish with rosemary sprigs.

I'm looking for a good beer bread recipe to substitute for the potatoes, but until I find one, this will have to do.

The Feared Redhead had an ultrasound last Monday. I finally had a chance to scan the printouts: 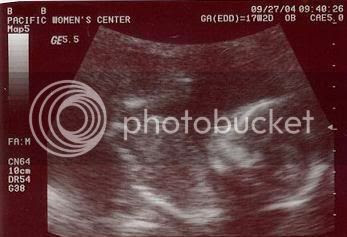 I think it's the sweetest thing I've ever seen in my life. But I'm admittedly biased -- bear in mind, half it's DNA is from me. Be afraid. Be very afraid.