Remember this headline in a British Newspaper? 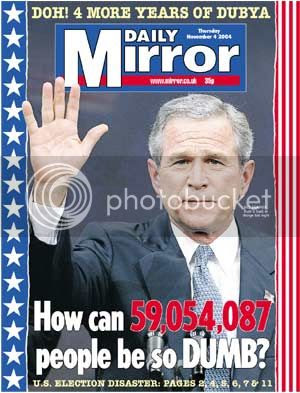 So how many of those 59 Million + "Dumb" Americans would you suppose know what Auschwitz was?

For all those who have been supporting my family:

I just got an E-mail from my aunt Glenda, Donna's older and My mom's younger sister:

I just got a call from Wade[Donna's husband - ed.]. Donna is out of surgery and is doing well except for the following two issues:

The nerve laying against the blood vessel that causes the twitch was bigger than they expected so they were able to succeed 95%. Wade and I are not sure what that means. Is she going to have a twitch that is 5/100 as bad as before? That would be a terrible disappointment so please pray for 100%

Also, one of the possible side affects could be a loss of hearing on that side because of the close proximity of the hearing nerve or whatever. Apparently she was responding auditorily just fine until they finished at which time Wade said "it went South" and they will not know until she awakens whether or not there is hearing loss on he left side. Another opportunity for prayer.

The danger now is brain swelling.

Thanks you for your prayers
love,
glenda

Thanks for the Memory to Vic at Darth Apathy.

A Hush Over Hollywood

Somewhere in the world, a filmmaker creates a short documentary that chronicles what he perceives as the excesses of anti-abortion activists. An anti-abortion zealot reacts to the film by killing the filmmaker in broad daylight and stabbing anti-abortion tracts onto his body. How does the Hollywood community react to this atrocity? Would there be angry protests? Candlelight vigils? Outraged letters and columns and articles? Awards named in honor of their fallen comrade? Demands for justice? Calls for protection of artistic freedom? It’s a pretty safe bet that there would be all of the above and much more. And all of the anger would be absolutely justified.

So I’m trying to understand the nearly universal lack of outrage coming from Hollywood over the brutal murder of Dutch director, Theo van Gogh, who was shot on the morning of November 2, while bicycling through the streets of Amsterdam. The killer then stabbed his chest with one knife and slit his throat with another.

The presumed murderer, a Dutch-born dual Moroccan-Dutch citizen, attached a 5-page note to van Gogh's body with a knife. In it, he threatened jihad against the West in general, and specifically against five prominent Dutch political figures. Van Gogh’s crime? He created a short film highly critical of the treatment of women in Islamic societies. So, again I ask, where is the outrage from Hollywood’s creative community? I mean, talk about a violation of the right of free speech!

Perhaps they are afraid that their protests would put them in danger. That, at least, is a defensible position. If I were Michael Moore, I would much rather rail against George W. Bush, who is much less likely to have me killed, than van Gogh’s murderer and the threat to creative freedom he brings. Besides, a man of Moore’s size would provide a great deal of “bulletin board” space.

Maybe they think it would be intolerant of them to criticize the murder, because it would put them on the side of someone who criticized a segment of the Arab world. And, after all, we are often reminded that we need to be more tolerant of others, especially if they’re not Christians or Jews.

There’s another possibility; one that seems crazy on the surface, but does provide an explanation for the silence, and is also in keeping with the political climate in Hollywood. Is it just possible that there are those who are reluctant to criticize an act of terror because that might somehow align them with President Bush, who stubbornly clings to the notion that these are evil people who need to be defeated? Could the level of hatred for this President be so great that some people are against anything he is for, and for anything he is against?

As nutty as it sounds, how else can you explain such a muted reaction to an act that so directly impacts creative people everywhere? Can you conceive of a filmmaker being assassinated because of any other subject matter without seeing a resulting explosion of reaction from his fellow artists in America and around the world?

As I said, it’s a nutty-sounding explanation, but we live in nutty times.

Recipe of the Week

On Highway 126 between Eugene and Florence, Oregon, just west of the tunnel at the summit of the Coast Range, lies a small restaurant that has become something of an institution here in Western Oregon. The Gingerbread Village has been there since 1966, before I was born, and makes some of the yummiest gingerbread you’ll ever have, both traditional cake-like gingerbread as well as gingerbread pancakes. My parents used to love to go there as a young couple, and now so do the Feared Redhead and I. Whenever we go to the coast, we stop on the way.

I created this recipe some time last year, after our last visit to the coast. The Village sells it’s gingerbread recipe dry ingredients as a mix, and we had picked some up. I was making gingerbread pancakes, and wanted something a little more special than straightforward maple syrup, so this is what I concocted. I didn’t have a name for it, but based on the flavors, the Feared Redhead says I should call it Harvest Syrup, so, there you go.

Combine all ingredients in a saucepan over medium heat. Bring to a low boil, stirring frequently. Reduce heat, simmer until the syrup is reduced to the desired consistency (This is a personal preference. I like mine thicker than maple syrup but thinner than honey). Serve over pancakes, waffles, crepes, or best of all, gingerbread.