The best thing I have seen in a long time!

I have something extra for which to be particularly thankful this Thanksgiving -- on Tuesday I found a second job -- I was hired on as a substitute cook for a local school district. Things are looking up!
Posted by B.B. at 11/26/2009 07:12:00 PM No comments:

An Almost Perfect End to a Long Night

Sad day. My Alma Mater, the Douglas High School Trojans lost a squeaker to Sweet Home -- Congratulations to SHHS, you earned it.

Hope and Change Smoke and Mirrors

A Tip of the Toque to Gaius at Blue Crab Boulevard.

Remember Obama's promise to bring transparency to government? Apparently, not so much. From a new article by ABC News:

Here's a stimulus success story: In Arizona's 15th congressional district, 30 jobs have been saved or created with just $761,420 in federal stimulus spending. At least that's what the Web site set up by the Obama administration to track the $787 billion stimulus says.

There's one problem, though: There is no 15th congressional district in Arizona; the state has only eight districts.

And ABC News has found many more entries for projects like this in places that are incorrectly identified.

Late Monday, officials with the Recovery Board created to track the stimulus spending, said the mistakes in crediting nonexistent congressional districts were caused by human error.

"We report what the recipients submit to us," said Ed Pound, Communications Director for the Board.

That's not mere human error. That's either laziness or intentional deception on the part of the recovery board for not verifying the claims before postingthem to a government website.

Meanwhile, over at the New York Times (of all places!), Ross Douthat points out the moving of goalposts by the administration:

...The stimulus bill was framed and sold primarily as a jobs bill, and the Obama administration placed a substantial bet on the promise that the unemployment rate would start dropping before 2010 arrived. When the stimulus passed with almost no Republican support, Rahm Emanuel, the president’s chief of staff, declared that “the most important number ... is how many jobs it produces, not how many votes it gets.”

He was right. But with unemployment near a 25-year high, that “most important number” isn’t looking very good. The White House is stuck arguing counterfactuals — how much worse the economy would be without the stimulus — and trumpeting obviously inflated estimates of how many jobs have been “created or saved” by federal dollars.

Happy Veterans Day to all the veterans who stop by and read me. Thank you for your service, it means the world to me. And a special message to my favorite veteran: 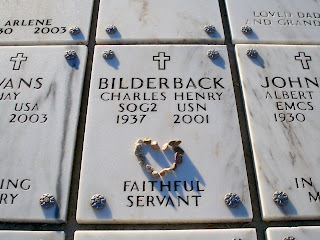 Sorry I haven't posted earlier in the day. I had a busy one -- out enjoying that freedom you purchase for me, often with your very lives.

But don't think the day went unnoyiced, nor your sacrifices unappreciated. Those of us who live inside the walls on which you stand your watch are grateful, and we're keeping the hearth warm for you.

Stanford, no matter how badly they're doing, nor how good the Ducks are, has a knack for spoiling things for Oregon. Back in 2001, they handed the Ducks their only loss and knocked them out of the BCS championship game. Today they ended Oregon's winning streak,, and made it very possible for Oregon to gewt knocked out of the Rose Bowl. The Ducks hung tought, but just couldn't catch up after an early Stanford buildup.

On the other hand, I'm absolutely THRILLED with this week in high school football. My alma mater, Douglas High School, trounced their oldest rival, South Umpqua, 33-0, ending the season undefeated, and with outright ownership of the Far West League. They now get a first round bye before being the home team in the 2nd round of the OSAA division 4A state playoffs. Go Trojans!
Posted by B.B. at 11/07/2009 06:22:00 PM No comments:

A Prayer for Fort Hood

Been at work all day so this is my first chance to post about the shootings at Fort Hood.

My heart breaks for the soldiers, families, and civilian workers involved in this tragic, horrible incident. It is one thing to go in harms way, to stand on the Thin Red Line between our homeland and those who woudl destroy her. It is another thing entirely to be ambushed while on her soil, on your own base, in the one place you should be safest and most succored.

My prayers are with you tonight. May God our Father in His infinite love and grace grant you comfort and guidance. May you rest in eternall bliss, far from the strife which you so willingly faced so that we may avoid it. Tears are not enough to express my sorrow for what has happened to you, but they are the only meager token I can offer.
Posted by B.B. at 11/05/2009 09:30:00 PM No comments:

A Tip of the Toque to LMC at The Llama Butchers for this post, which got me on an old '80's music kick -- You remember the '80's, when hair was big, ballads were bigger, and the "M" in MTV actually meant "Music"? Yea, those '80's. Good times, good times.

So anyway, the whole '80's video wallowing I did made me reminisce on my amazing love life during the '80's. And by amazing, I mean amazingly dismal. I didn't have much luck with girls in my teens, or in my early 20's, for that matter. I had a few (count 'em on one hand) girlfriends, but they all dumped me after a very short amount of time. Most of my romantic activities during that era consisted of crushes on girls who thought I was a "great guy" but "more like a brother". Yeah, ladies, I'm looking at you.

This led to me being VERY much a connoisseur of the breakup/unrequited love subgenre of pop songs of the 80's, a time ripe with them, since the style of the time lent itself to sap and mauflin to begin with.

So I decided to compile a list of my top ten lost/never had love songs og the '80's. OK, Top 12 -- Twice two or more songs by the Same Artist get listed. On one occasion they share a spot, on another they each get their own ranking. Some of them I managed to pull right off the top of my head, some I had to research to be reminded, but in the end, these are the ones *I* came up with, with some commentary -- enjoy:

UPDATE:
I got a couple comments this morning, and another song I really liked back then was mentioned. Also this morning a forehead-slapper "How could I have forgotten that?" song came to mind, so I've decided to update the list, with some honorable mentions:

Falling from #9 (spot the reference), Against All Odds - Phil Collins
I never saw the movie, but it was a great song.

Owner of a Lonely Heart - Yes
An interesting refutation of the old "Better to have loved and lost" adage, and probably the rockingest song on the list. Great guitar and keyboard riffs in this song. Thanks, Robbo, for the reminder.

10. All Out of Love - Air Supply
For me this song screams "Slow dancing with my homecoming mercy date who now has the heels of her palms against my shoulders and elbows lockled to make sure I don't try to dance too close".


9. . Careless Whisper - George Michael
The ultimate song about losing someone because you deserved to.

8. With or Without You - U2
A great song, an awesome video, one of the last ones where Bono still looks lean and hungry, which adds to the feel of the song. Too bad it was also in the period where he was standing on the precipice of Hubris.

7. Total Eclipse of the Heart/It's A heartache/Making Love (Out of Nothing at All) - Bonnie Tyler
Gee, Bonnie, got a theme going? But seriously, they all still get to me.

6. If You Leave - Orchestral Manoeuvres In The Dark
It took me a long time to forgive John Hughes for not letting Ducky win Andie in the end -- mostly because I identified so much with Ducky. There were a lot of characters in Hughes movies who made me think, "My Gosh, that's ME! -- Cameron Frye in Ferris Bueller's Day Off, Brian in The Breakfast Club, The Geek in Sixteen Candles...

3. Boys of Summer - Don Henley
This is the "I Miss you and I'm not ready to give you up" song.

2. Heart of the Matter - Don Henley
Same artist, different album, this one is almost a bookend to "Boys of Summer", and is about moving on.