Variations on a Theme (Or At Least a Slogan) 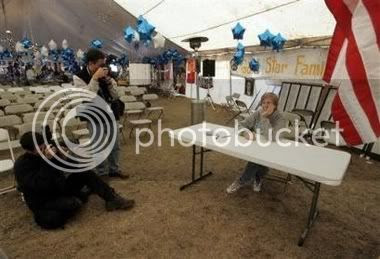 What if they held a war (protest) and nobody came?

Thanks for the Memory to Mean Mr. Mustard.

You know, every time the debate about the War in Iraq comes up, if those of us who support the decision to go to war criticize the actions or rhetoric of those who oppose it, we're immediately reminded that dissent is patriotic, and that those who oppose the war don't resent the troops, just the leaders who send them to war. They remind us that they support and love the troops, they just oppose the war.

Ted Rall's a horse's arse. And considering the quality (or lack thereof) of the drawing, he can't even fall back on the excuse that it's "art." Well, I take that back. They give paintbrushes to chimps and call the result art, so I guess that Rall's published Pooh-flinging earns the same aegis.

But Judas Freaking Priest on a Polo Pony, can we at least request he (and others who use similar rhetorical devices) drop the freaking charade of "patriotic dissent" and call themselves what they are -- ugly, troop-hating sedition-mongers? Please?
Posted by B.B. at 11/28/2005 01:01:00 PM No comments: