It's About Damned Time!

Thanks for the Memory to Blogfather Rusty.

So I give my friend Vulture Six a lot of ribbing about how much I prefer my beloved home state of Oregon to his beloved Texas, and he gives me just as much ribbing back. But he is a good friend, and quite fair-minded. So, to be fair and respond in kind, I present:

Top Ten Reasons Houston Isn't As Bad As I Let On

10. Cheap gasoline. Saved our budgetary arses, it did.
9. Johnson Space Center. If you love science, love astronomy, love the space program, Houston has a special place in your nostalgia. I just wish I'd had time to go see it.
8. Tex-Mex. I prefer Baja cuisine myself, but I have to admit to enjoying Tex-Mex, especially those fried dessert things... what were they called? And I wonder why I need to lose weight.
7. Chik Fil-A (sp?). OK, so it's found other places, but that's where I was introduced to it.
6. Shiner Bock. Damned good beer. I still favor local brews, but Oregonians pride themselves on appreciating good beer as much as making it, and so I have to give it its props. It sure as hell beats Sam Adams five different ways from Sunday.
5. Whattaburger. Mmmmmmm...... best damned restaurant hamberger I've ever had. Puts In-N-Out or my local favorite, Burgerville, to shame (notice a trend here?).
4. Texans know how to throw a party. Seriously, Scott, that was the best spread I've ever seen. Brisket, chicken, sausage... I'm starting to drool.
3. It's home to one of the best friends you could ever ask for.
2. Give me a second, I'll think of something.... Oh, Yeah:
1. IT'S NOT CALIFORNIA!!!!!!
Posted by B.B. at 6/09/2005 10:12:00 AM No comments:

Since I moved back to Oregon, and settled here in Lane County, this has become my favorite time of year. One of the reasons I favor it is because it's early enough in the year that there is still snow in the High Cascades, but the weather is nice enough down here in the valleys that you get clear air and a good view of the mountains. In fact, because of the placement of one of our local freeways, I-105/Hwy 126, as it passes over I-5, our daily drive home points us straight at a picture-framed view of this: 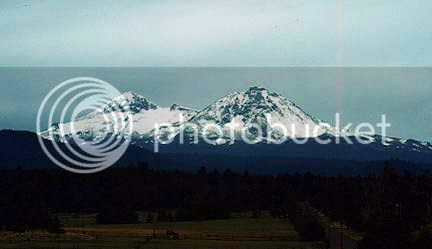 albeit from a different angle and a greater distance, it's a gorgeous sight each day. Those are the Three Sisters, and they're among the most likely volcanoes in the central Cascades to reactivate during my lifetime.
Posted by B.B. at 6/09/2005 05:40:00 AM No comments: