Thanks for the Memory to Gully at Resistance is Futile!

NW Republican attended the first debate between the three front-running Republican candidates for the upcoming gubernatorial race, Here and Here.

The more I hear coming out of Jason Atkinson's mouth, the more I'm sure that, win or lose, he's the guy I'm voting for. I was particularly impressed with his response to this question:

Questions from the crowd -
"Where do you stand on abortion and right to die?"

Atkinson -
I'm prolife. I'm against right to die. I will uphold right to die and work toget the voters to undo it. As governor I will fight for right to die because I believe in states rights and disagree with the Federal government telling us what laws we can pass. I will fight for this on principle though I will also work to undo it. Same with initiatives as the people's will should be done by their public servants.(This is paraphrasing in a nutshell).

I Walk the Feline

TFR rescued a small, wet, very scrawny kitten from the rain yesterday. We're not sure we can afford to take it in, so we're probably going to try to find someone to adopt it. If any of my Eugene readers want a cute, predominantly white tortoiseshell kitten, drop me a line.
Posted by B.B. at 12/08/2005 12:26:00 PM No comments:

Last night I watched a documentary on the sinking of the battleship USS Arizona at Pearl Harbor. The documentary followed the progress of a commission that was investigsting just what type of attack caused the sudden, fiery death of such a huge ship. The conclusion was that the Arizona had not been struck by torpedo, nor had a bomb gone down her stack to take out the boiler. The explosion seen spouting out the stack is secondary -- the death blow was a single armor piercing bomb that penetrated her decks and exploded directly in the forward magazine, setting of the powder supply for her main batteries.

Thanks for the Memory to The Jawa Report.

Blogfather Rusty is reporting that the terrorists have made good on their threat to murder the latest American hostages -- or at least one of them.

Reports have begun circulating that Ronald Schulz has been murdered.
The website used by The Islamic Army in Iraq, though, has not carried
this message. Instead, it was posted at an Islamic bulletin board. It
sometimes takes a few hours for these messages to become 'official'.
We had earlier reported that the deadline had passed without word from
the group.

It Was An Awesome Dream

Night before last I dreamed that Chevrolet took a cue from the new Ford Mustang and Dodge Charger, and redesigned the next model Camaro so that it was stylistically reminiscent of a 1967 Camaro SS. 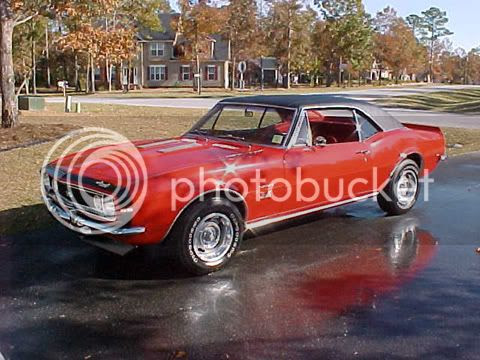 WAY Too Much Time on their Hands

Thanks for the Memory to Careful Thought via The LlamaButchers.

If you're this bored:

Margo Lillie, a doctor of zoology at the University of British Columbia, and her student Tracy Boechler have conducted a study on the physics of cow-tipping.

Ms Boechler, now a trainee forensics analyst for the Royal Canadian Mounted Corps, concluded in her initial report that a cow standing with its legs straight would require five people to exert the required force to bowl it over.

A cow of 1.45 metres in height pushed at an angle of 23.4 degrees relative to the ground would require 2,910 Newtons of force, equivalent to 4.43 people, she wrote.

Dr Lillie, Ms Boechler’s supervisor, revised the calculations so that two people could exert the required amount of force to tip a static cow, but only if it did not react.

“The static physics of the issue say . . . two people might be able to tip a cow,” she said. “But the cow would have to be tipped quickly — the cow’s centre of mass would have to be pushed over its hoof before the cow could react.”

Newton’s second law of motion, force equals mass multiplied by acceleration, shows that the high acceleration necessary to tip the cow would require a higher force. “Biology also complicates the issue here because the faster the [human] muscles have to contract, the lower the force they can produce. But I suspect that even if a dynamic physics model suggests cow tipping is possible, the biology ultimately gets in the way: a cow is simply not a rigid, unresponding body.”