You'll recall my post of a week ago regarding Jacqui, the little girl with a big medical need.

Well, this week, I've received an email from her grandfather, and if you're reading this from the Eugene area, here's a great way to help her out:

Please keep us in your thoughts and prayers as we work to raise the remaining funds during the last remaining weeks leading up to her surgery - we have quite a way to go yet. We are confident that with a few people like you doing what they can, we will get there!
Just in case you have time to help spread the word about a local fundraiser, we have included two info sheets for distribution for a Papa's Pizza fundraiser we have scheduled for November 2nd. Papa's Pizza at any Eugene location will donate 50% of any order placed by anyone bringing in a flyer to their restaurants on Wednesday, November 2nd. Feel free to e-mail, copy, and distribute to anyone you think might participate. Thanks for caring! 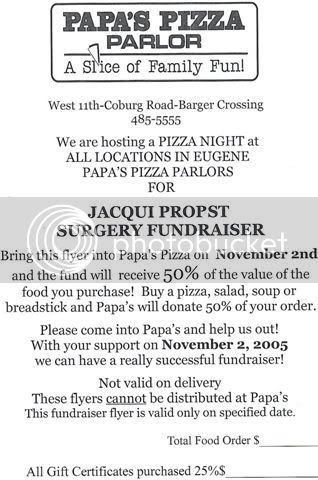 You get pizza, AND you get to help a sweet little girl. Win/Win!

I Am the Very Model of a Very Ancient General

Thanks for the Memory to The LlamaButchers.

Sheehan Bites the Hand that Talked to Her

Thanks for the Memory to The Llama Butchers.

Cindy Sheehan has written an open letter critical of Hillary Clinton's support of the War in Iraq.

Now, I'm not the biggest fan of Hillary Clinton (heck, I usually can't stand the woman), but obviously, on this issue I agree with her. Furthermore, I feel a couple of Sheehan's comments needing response:

"I believe that the intelligent thing for Democrats to do for 2006 and 2008 would be to come out strongly and correctly against the botched, bungled, illegal, and immoral occupation of Iraq,"

I won't even bother responding to her description of the war, as it has been addressed time and time again. However, considering how successful the Democrats were in 2004 when they ran in opposition to the war, ther'e unintended irony in Cindy's use of the word "intelligent".

The California woman, whose son Casey was killed fighting insurgents in Iraq, launched an anti-war movement when she camped outside President Bush's Crawford, Texas, ranch in August and demanded to meet with the commander in chief, drawing national media attention.

She was granted a meeting with Sen. Clinton to discuss the war effort, but says the Democrat "apparently" didn't listen,

And Cindy wonders why the President won't talk to her? Noone with any sense believed for a minute that that is all she wanted, or that it would do any good. She doesn't want the President to TALK to her, she wants him to DEFER to her. And that's just not his job. So even if he had talked to her, she would have come away with even more ammo, because she would just tell us that he "Apparently didn't listen."

as the senator told a reporter for the Village Voice, "My bottom line is that I don't want their sons to die in vain. ... I don't believe it's smart to set a date for withdrawal. ... I don't think it's the right time to withdraw."

"That sounds like Rush Limbaugh to me," Sheehan said. "That doesn't sound like an opposition party leader speaking to me.

News Flash for ya, Cindy, but the phrase "Opposition Party" doesn't mean that the Democrats have to automatically disagree with the Republicans on every single issue, just out of contrariness. I understand that this is how many people think, "If the Republicans are for it it must be bad", but that really is quite short-sighted and frankly, unintelligent.

Which brings us back to the first quote. The TRULY intelligent thing for the Democrats to do, Ma'am, would be to decide what they stand FOR, instead of whom they're AGAINST. But as long as people like you and Michael Moore and George Soros continue to leverage your publicity and money to position yourself as the Voice of the Left, that's not going to happen.