A Thrilla of a Grilla, or I've a Beef

Outside of the Larger cities of the Willamette Valley (namely Eugene, Salem, and the Portland Metro Area), Oregon is suprisingly Red State, and culturally closer to the Mountain West than to California. That's reflected in one of the annual promotionals run by Les Schwab Tires, a regional tire store chain. It's Free Beef Time at Les Schwab! A couple of years ago here in Eugene, a local bike shop tried to lampoon it with Fre Tofu Days. It flopped.

So this year, with the tires on the Moronmobile going bald, I decided to buy their replacements at Les Schwab, both because of the free beef and because I like supporting local and regional businesses. But there was a bonus. They're having a drawing to give away a bunch of these: 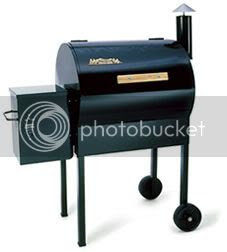 It's a Traeger Lil' Tex barbecue. It's not gas, it's not charcoal -- it uses wood. Wood pellets, to be precise. They're made right here in Oregon, and apparently they're quite popular even in traditional barbecueing regions. It's a true barbecue, not just a grill -- you can smoke, slow barbecue, or grill on it.