A Blog is Born

A Lesson from Lessons

My mom sent me the following metaphor via email and I thought it worth sharing:

A young woman was about to finish her first year of college. Like so many others her age she considered herself to be a very liberal Democrat
>and was for distribution of all wealth. She felt deeply ashamed that her father was a rather staunch Republican which she expressed openly.

One day she was challenging her father on his beliefs and his opposition to higher taxes on the rich & the addition of more government welfare programs. Based on the lectures that she had participated in and the occasional chat with a professor she felt that for years her
father had obviously harbored an evil, even selfish desire to keep what he thought should be his. The self professed objectivity proclaimed by her professors
had to be the truth and she indicated so to her father.

He stopped her and asked her point blank, how she was doing in school. She answered rather haughtily that she had a 4.0 GPA, and let him know that it was tough to maintain. That she studied all the time, never had time to go out and party like other people she knew. She didn't even have time for a boyfriend and didn't really
have many college friends because of spending all her time studying. That she was taking a more difficult curriculum.

Her father listened and then asked, "How is your good friend Mary doing?"

She replied, "Mary is barely getting by." She continued, "She barely has a 2.0 GPA," adding, "and all she takes are easy classes and she never studies." "But Mary is so very popular on campus, college for her is a blast, she goes to all the parties all the time and very often doesn't even show up for classes because she is too hung over."

Her father then asked his daughter, "Why don't you go to the Dean's office and ask him to deduct a 1.0 off your 4.0 GPA and give it to your friend who only has a 2.0." He continued, "That way you will both have a 3.0 GPA and certainly that would be a fair and equal distribution of GPA."

The daughter visibly shocked by her father's suggestion angrily fired back, "That wouldn't be fair! I worked really hard for mine, I did without and Mary has done little or nothing, she played while I worked real hard!"

Thanks for the Memory to Derek Crane:

Apparently the office of the election campaign of Craig Fitzhugh (D-Tenn.), which also serves as the local campaign HQ for Kerry-Edwards, thought the following image expressed their opinions aptly, and chose to distribute it: 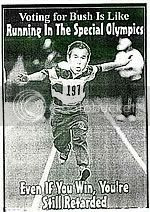 If you can't read it, the caption reads "Voting for Bush is like running in the Special Olympics -- Even if you win you are still retarded."

Very nice. This from the Party of PC Language. I'm sure they didn't intend to mock the special Olympics while simultaneously mocking the President -- of course, I only give them the benefit of the doubt because I don't think they were capable of thinking it all the way through. Either way, it's pretty sad. As one of my readers has said, "It's like the Limbo Dance!"

Right Wing Oppression: It's Real Because They Say So

Thanks for the Memory to Drudge via Ace of Spades HQ:

Haven't heard of it happening? You will -- even if it doesn't:

DNC ELECTION MANUAL: CHARGE VOTER INTIMIDATION, EVEN IF NONE EXISTS

The Kerry/Edwards campaign and the Democratic National Committee are advising election operatives to declare voter intimidation -- even if none exists, the DRUDGE REPORT can reveal.

A 66-page mobilization plan to be issued by the Kerry/Edwards campaign and the Democratic National Committee states: "If no signs of intimidation techniques have emerged yet, launch a 'pre-emptive strike.'"

The provocative Dem battle plan is to be distributed in dozens of states, the DRUDGE REPORT has learned.

One top DNC official confirmed the manual's authenticity, but claimed the notion of crying wolf on any voter intimidation is "absurd."

"We all know the Republicans are going to try to steal the election by scaring people and confusing people," the top DNC source explained.

Infuriating. But not too surprising. I've said all along that the things those on the Left scream loudest about are usually the things of which they're guilty themselves. I'm curious to see where this leads, but won't get my hopes up.
Posted by B.B. at 10/14/2004 10:45:00 AM No comments:

Why This Time of Year Is My Least Favorite Weather Season