Mr. Bush, Build Up This Wall!

I got a little Linky-Love from the Nakedly Villainous Maximum Leader today. He offered his perspective on our immigration conversation. I'm one hundred per cent in agreement with everything he says in the post. But we did disagree on one topic, one neither of us mentioned in our posts -- the importance of a border fence/wall.

I'm all for it. As Maximum Leader points out, the debate over immigration reform is moot if we cannot enforce any present or future immigration laws. The current debate on immigration is too focused on what to do with illegals already here, and not enough on how to keep them out in the first place. To control immigration, we must control our borders. A physical barrier to the unfettered crossing of the border is a good start.

Not everyone agrees. Kathy the Cakeater went so far as to call it a "B.C. tactic", comparing it to Hadrian's Wall or the Great Wall of China. She goes on to say that such a wall "won't do anything to actually solve the problem of WHY Mexicans want to cross the border, but will only force the illegals to find another way to get across...."

But as I argued in the earlier post, yes, to a certain extent, it will. The title of that post was an allusion to an amusing children's song, one I hoped someone besides Maximum Leader would catch. The song presents a conundrum similar to the one we face with illegal immigration -- a series of problems where the solution to each one presents another, until the solution to the last problem presents the singer with the first problem. And again, that's what we're facing with immigration. Kathy argues, and I acknowledge, that we need to solve the problem of WHY Mexicans (and others, for that matter) want to cross the border". But that problem will never BE addressed so long as they are able to do so with relative ease. At least not where it needs to be addressed -- in Mexico. Why fix what's broken when you can just move north where things still work (for now)? Mexico has discarded its poor, and now they are discarding Mexico. The only way they will ever fix Mexico is if they STAY in Mexico, and the only way that will happen is if we make it easier and more worthwhile to do so than to simply jump ship and head north.

Maximum Leader did raise one objection that is valid and important enough to address. But I believe it is more of a caution than a deal-breaker. And that is the pitfall of assuming that a wall is sufficient to secure our border alone. And on this we are in agreement. Like him, I believe that it is also vital that we beef up the Border patrol: more personnel; better training; better equipment; better "Watching Their Six" policies; robust, response to any physical attack on Border Patrol Personnel; and an immigration policy that is a bit stiffer that the current revolving door that is a source of so much frustrartion to BP agents.

Comparing a modern border wall to Hadrian's Wall or the Great Wall is as superficial as comparing Iraq to Vietnam, or worse. For a far more recent example of a wall, Kathy might have looked to Israel. Since the construction of their wall, suicide attacks in Israel have dropped sharply. If done right, a wall is still a valuable tool in providing security to a nation.
Posted by B.B. at 3/29/2006 01:19:00 PM No comments:

Eight questions, open book -- all answers can be found in Johnny Cash's music.

Thanks for the Memory to Mean Mr. Mustard.

To those who would have us believe that all the protestors marching against the Immigration bill in Congress are just civic-minded patriots, I say:

You're too late. THIS: 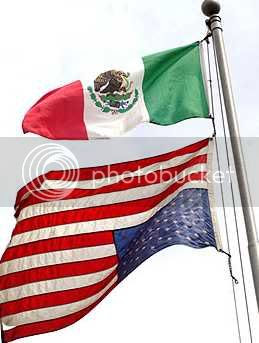 Is already burned into our heads.

Thanks for the Memory to GroovyVic at Fiddle Dee Dee.

In my earlier post regarding Sharon Stone's comments about Hillary Clinton, I overlooked a link to another comment by Stone, which Vic pointed out to me. But this one isn't laughable, it's maddening. In talking about advocationg safe sex to teens, she said:

Well, you should be embarassed, Sharon. In fact, you should be ashamed. What you SHOULD be telling teens to do if they're being pressed for sex is to call their parents or the police or a trusted adult, and instead of breaking out the condoms, they should be breaking out the pepper spray. Because when you "cannot get out of sex", that's called RAPE!

Look, it's pretty obvious to anyone who knows me what our first line of defense with The Lad and any of his possible future siblings will be: We will be teaching abstinence. And while people may not always agree with that philosophy, I would hope everyone can agree that whether our children heed our teachings about when and with whom to have sex or not, this much is not open to debate: It will not be forced ON them, and they will not force it on anyone else.

No means NO. Even Sharon Stone should understand that.