Thanks for the Memory to Admit One.

Actually, it's a UOO - an Unidentified (for now) Orbiting Object. It rotates once a minute and orbits the earth once every 48 days. 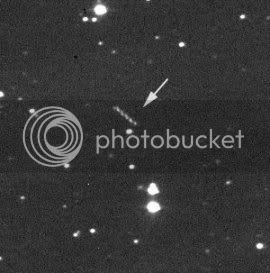 Speaking the Truth to Power

Thanks for the Memory to Admit One via Y-2-DRAY.

You know, maybe there is some merit after all to the argument that the solution to the problem of terrorism is to understand our enemies, to find common ground from which to dialogue.

The Press and Hanlon's Razor

Thanks for the Memory to Bluto posting at Blogfather Rusty's.


Press passes pulled from Pilot's Iraq duo
NORFOLK -- The military this week pulled the press credentials of an embedded reporter and photographer for the Norfolk-based Virginian-Pilot newspaper in Kuwait, saying they had violated ground rules by photographing battle-damaged military vehicles.

Virginian-Pilot Editor Denis Finley said the incident arose from a misunderstanding. Military escorts had taken reporter Louis Hansen and photographer Hyunsoo Leo Kim to a compound in Kuwait where they worked on a story about a unit whose job was to clear battle-scarred Humvees and other vehicles for shipment home. Under those circumstances, the journalists believed they were allowed to photograph the vehicles, Finley said.

But after the paper published the story and photos on Saturday, the Kuwait-based Coalition Forces Land Component Command, Forward, pulled their press passes, noting that one of its ground rules prohibits video or photos of battle-damaged vehicles.

Finley said the incident happened on the final day of the men's two-week trip to the Middle East, "so we were done anyway." He said he was waiting to hear the full story from the two, who were in transit back to the U.S., before deciding how vigorously to protest.

The journalists shouldn't have assumed anything. If they were not given explicit instructions that the rule about damaged vehicles was suspended, they should have stuck to the rules. As for the editor, how vigorously he protests is a direct indication of what an idiot he is.

Look, this isn't about Freedom of the Press. These reporters aren't being arrested, aren';t being told they can't be reporters, and aren't being punished for their opinions. They agreed to abide by a set of rules in exchange for the privilege of accompanyong the troops and having access to them and their facilities. The broke those rules, they lost the privilege. It's as simple as that.

And the rule isn't about the negative propaganda value of the photos. As Bluto pointed out, those photos could provide useful intelligence to our enemies. The extent of the damage, the way in which the damage occurred, the part of the vehicle where the damage occurred, all can provide insights into the strengths, weaknesses, and design of the vehicle, thus making them more vulnerable to a better informed enemy, and eventually increasing the risk to American soldiers.

Since the Vietnam War, people have complained that the press has been in bed with America's enemies, acting as a de facto propaganda organ for them (a view I do hold to some extent), while others respond that the press is merely enforcing the people's "right to know". But this goes beyond providing propaganda to providing tactical intelligence to the enemy. Considering the level of duplicity with the enemy this would require, I am inclined to apply Hanlon's Razor to this case. Hanlons Razor states:

Never attribute to malice that which is adequately explained by stupidity.