Thanks for the Memory to Darth Apathy.

This is simply amazing. I've read of shots like that being made by snipers who had time to set ther shot up -- but in a reactive situation like this? Wow.

And as was pointed out, given the circumstances, I doubt there'll be any problem establishing that the police fired in self defense.
Posted by B.B. at 5/01/2006 01:13:00 PM No comments:

More Pictures of The Lad

Luke, Give in to the Cute Side. It is... your destiny: 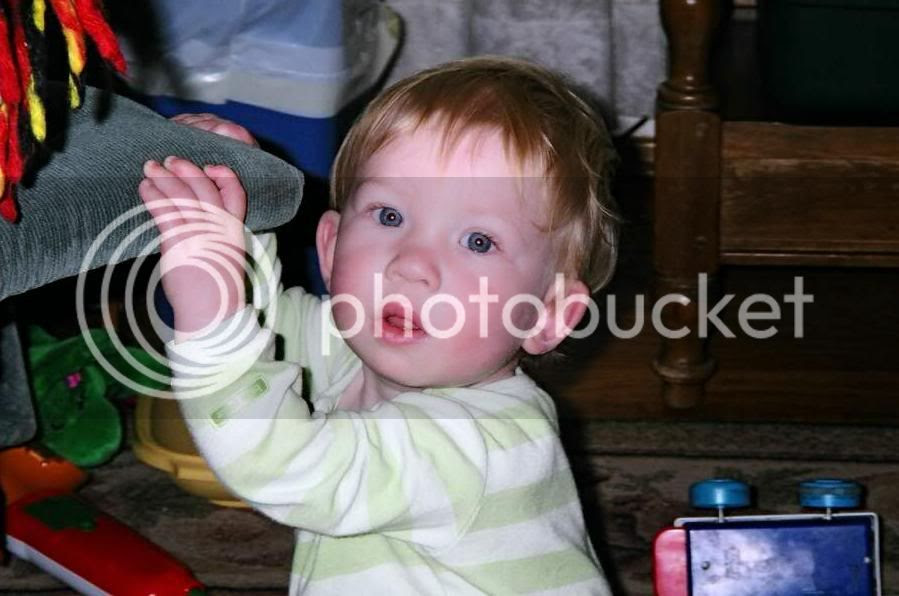 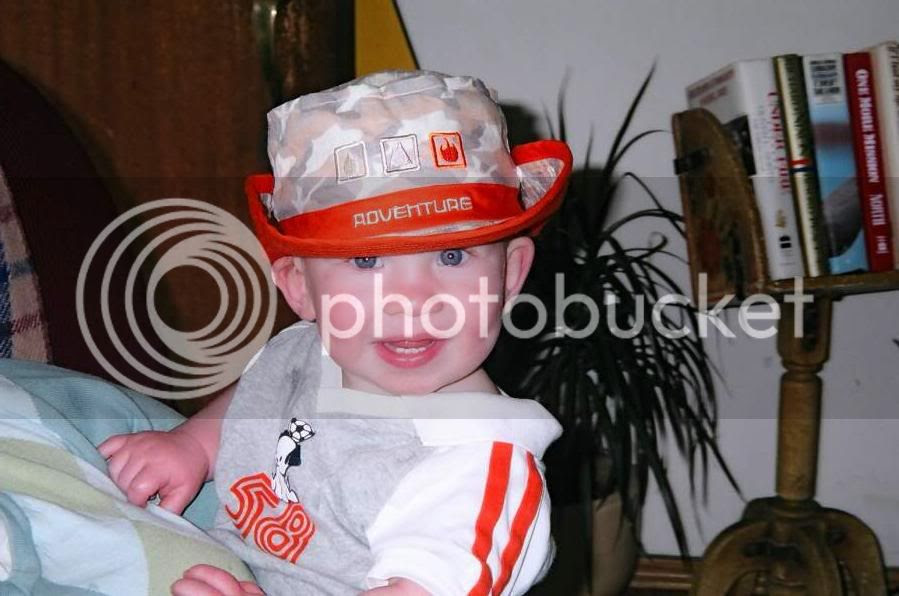 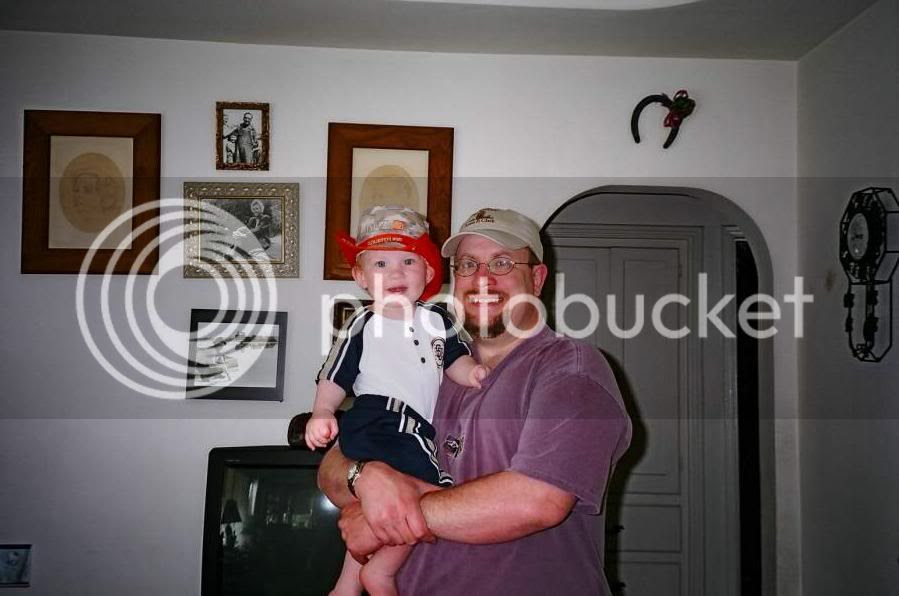 The Closest They'll Come to Meeting This Side of Heaven

While we were in San Diego for my grandmother's funeral, w took The Lad to visit my father's grave at Fort Rosecrans National cemetery. My mother took pictures: 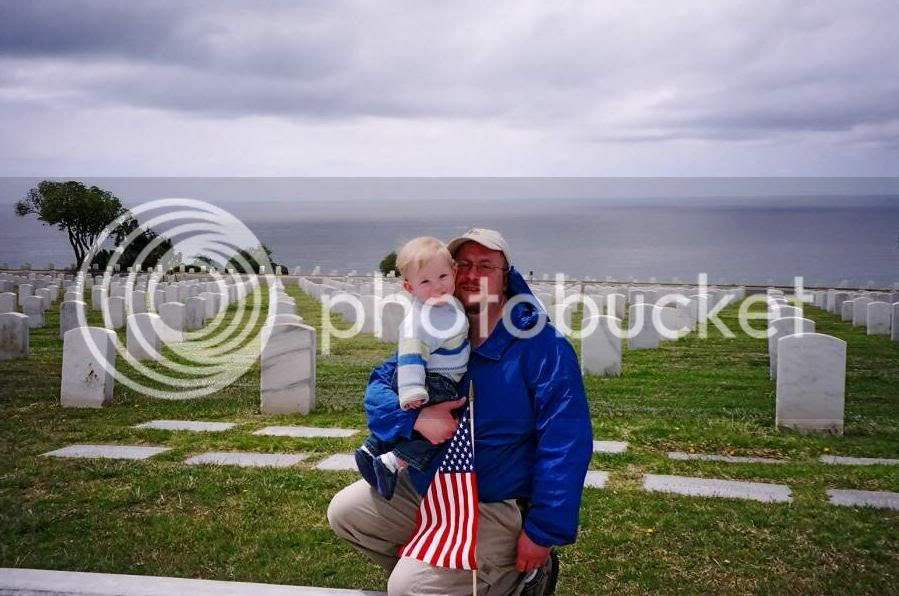 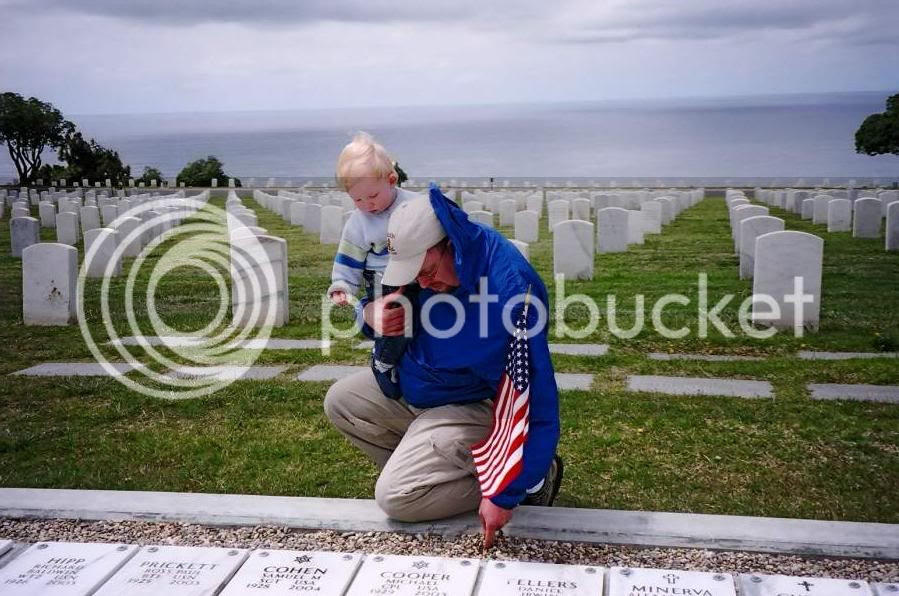 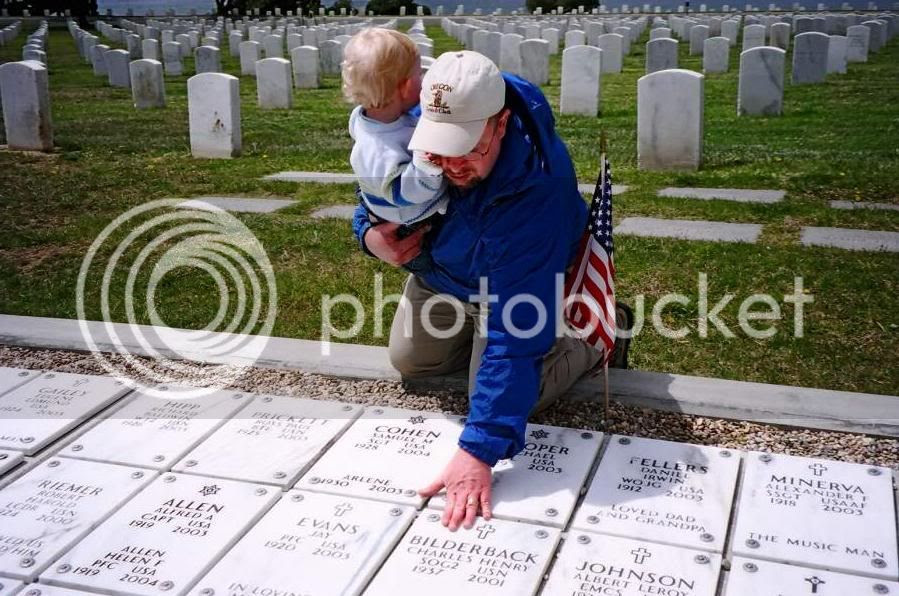 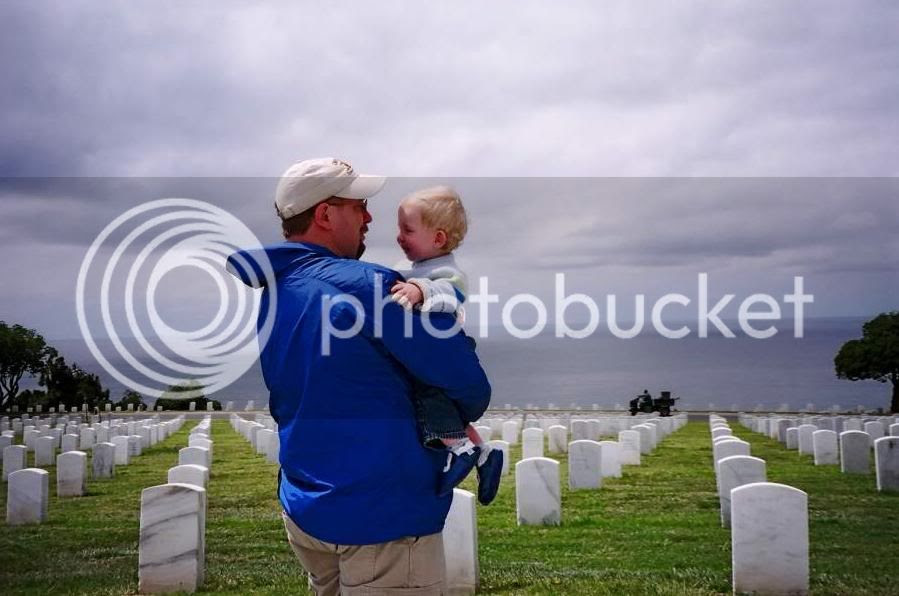 Thanks for the Memory to The Llama Butchers.

If you haven't read her before, I second the Llamas' recommendation that you go read Melissa at Here in the Bonny Glen. She's witty, she's insightful, and she's a wonderful mom.

Today, she gave me a shot in the arm. Her post is sweet, and full of maternal love and pride. And it was what I needed to hear.

Why? Well, you see, The Lad just turned 15 months and still isn't walking. He can pull himself up to a standing position, but still leans on furniture, including human furniture (that's me!). Yesterday he managed to stand without support for a full second -- a huge accomplishment in my eyes.

But it's been discouraging. We knew from the start that despite how well he's done, he's still a preemie, and some htings might just take longer. And I'm delighted that in all other areas, he's right on track -- he's developing a vocabulary (last week he pointed at his shelf and said, clear as a bell, "book!"), and a distinct personality, and his fine motor skills are... well, fine. But the gross motor skills are still an issue. Part of it, I think is that his method of scooting is so effective (he's fast, and it leaves a hand free to carry stuff) reduces the incentive to walk. But whatever the reason, It worries me.

Then I read a post like Melissa's, and it reminds me that I'm not the only parent dealing with these things, and that if Melissa's "Wonder Boy" can do it, so can MY wonderful little boy. So thank you, Melissa. And congratulations.
Posted by B.B. at 5/01/2006 11:32:00 AM No comments:

Thanks for the Memory to the Colossus via The Llama Butchers, and also to Villains Vanquished.

Over the course of the last three years or so, in the ongoing discussion of the war in Iraq, one of the memes that opponents of the war throw in the faces of supporters is the the epithet of "chickenhawk". They've even come up with a nickname for pro-war bloggers -- "The 101st Fighting Keyboardists".

A few bloggers, including Captain Ed, Frank J, and Chief at Freedomdogs, decided to pull a "Yankee Doodle Dandy" on the phrase and turn it into a badge of honor. The result is a blogroll of proud "chickenhawks" -- and a unit patch: 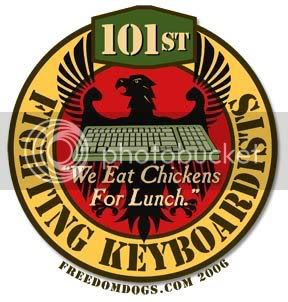 I've always thought that the "Chickenhawk" argument was disingenuous at best, especially when it's used as a rebuttal to arguments for the necessity of the war. So what's your point? Are you say I'm a hypocrite for making the pro-war argument, but not fighting myself? Maybe I am, maybe I'm not -- judging me on that point would require that you know a HELL of a lot more about me than is possible, considering I don't know you from Adam. But even if it were true, it has nothing to do with the validity of the argument I'm making -- it's an ad hominem attack.

Or are you saying that only those who serve are qualified, either morally or by merit of experiencial knowledge, to have an opinion on matters of national defense? I seem to recall that when Robert Heinlein proposed that system in Starship Troopers, it was decried as "fascist". And if you truly believe that, doesn't that disqualify YOU from speaking out on these matters as well? Sauce for the goose, you know. And what about the 132 million Americans who let only 4 millions fight for them in WWII? And are we all hypocrites for believing in laws, but not joining the police force? No, sorry, this argument doesn't hold up. While those who serve have earned a greater level of respect and honor than the rest of us, and while their acheivements in service of the country may make their qualifications for leadership more evident, they are no more qualified (or less, for that matter) to form and express opinions on matters that aafect us all than any of us are.

Beyond the logical inconsistency of the "Chickenhawk" attack is the personal nastiness of it. It states, often explicitly and always at least implicitly, that those who support the war but are not enlisted in the military are too afraid to fight. In fact, this insult is at the core of the supposed hypocrisy in being a chickenhawk -- why else the word "chicken"? But it commits another fallacy, that of the false dilemma -- it ignores a panoply of possible reasons why a person would be willing but unable to serve, and it ignores the fact that many of those who are not currently serving HAVE served in the past. I can't speak for veterans, but I should think they find this particular attitude insulting.

Over the weekend as I was thinking about the parenting observation I made last week, I became aware of several other truisms about parenting and children (especially small children still in the larval and rugrat stages of development). These are mostly things I was aware of before becoming a father thanks to exposure to kids as an uncle, but became more acutely aware, and more introspective towards, as a parent -- namely these two: The more tired a child is, the more violently he will resist being put down for a nap; and the quieter a child is being, the more likely it is that they're getting onto trouble. I decided to express them as mathematical formulas.

The first is pretty simple: Ws=1/Ns where Ws is the willingness of the child to sleep and Ns is the need to sleep.

That second one is the trickier of the two. At first it seemed like simple Newtonian parenting: T=M/L, where T= The likelihood that the child is getting into trouble, M is their natural mischeivousness, and L is how loud they're being. But there is another variable here, and that's time -- it takes time to get into trouble (though not always a LOT of time). So I reassigned the variable L to represent the Length of time since you checked on them, and assigned V as the volume of the noise the child is making, and got T=(M/V)L.

But that's where Uncertainty and Superposition come into play. For starters, the value of M varies from child to child, and can even change for a given child, depending on mood, maturity, and how much trouble they got in last time. Furthermore, while it is true that as L increases, T approaches 1, you can never be sure that T has become 1 and the child really has gotten into trouble until you go check on them. Doing this, however, affects the outcome in a couple of ways: Like Schrodinger's cat, it fixes the value of T at either 1 or zero -- either they're in trouble or they're not. Secondly, checking on the child resets L to zero, and finally, if the child becomes aware that you are checking on them, this will alter their behavior (M).