An Open Letter to the People of London

Permit me the honor of extending to you all the support, empathy, and encouragement I can muster as you cope with the aftermath of the cowardly, barbaric bombing attacks of July 7th. My thoughts and prayers have been with you since I heard the news. Britain and the United States once again find themselves with a commonality, a shared experience that draws us close to one another. We owe the very existence of our beloved country to brave settlers of English stock. we share a common language, a common ancestry, and a common cause: the cause of Freedom. While we purchased our independence from you in blood, we have re-established a bond of friendship and kinship in the same blood. Time and again, our two countries have proven each others' staunchest allies. And just as you stood by us in the dark days following 9/11, so we will stand by you now.

Watching the news coverage, I was deeply moved. And while I was moved to sorrow and anger and disgust at the savagery visdited upon you, I was most deeply moved, and stirred, by your response. It was the response of a Britain that I hoped, and believed, still existed. I was inspired by the defiance, the resolve, the courage you displayed. It speaks to your character as a culture that you fight the hardest, stand the straightest, and endure the bravest when your backs are against the wall. When I think of Britain in times like this, I think of one phrase: Bloodied but unbowed. Your ancestors who stood up to the Armada, or to the Luftwaffe, would have recognized themselves in you yesterday.

And so I encourage you with the words of one of your finest orators, a man who had ancestral ties to and a love of my land, Sir Winston Churchill. I imagine he'll forgive me if I change a few words:

Upon this battle depends the survival of Christian civilization. upon it depends our own British life and the long continuity of our institutions and our Empire. The whole fury and might of the enemy must very soon be turned on us now. [Al Quaeda] knows that it will have to break us in this island or lose the war. If we can stand up to them, all Europe may be free and the life of the world may move forward into broad, sunlit uplands. But if we fail, then the whole world, including the United States, including all that we have known and cared for, will sink into the abyss of a new Dark Age, made more sinister, and perhaps more protracted, by the lights of perverted [religion]. Let us therefore brace ourselves to our duties, and so bear ourselves that, if the British Empire and its Commonwealth last for a thousand years, men will say, "This was their finest hour."

UPDATE:
(Thanks for the Memory to Maximum Leader at Naked Villainy) 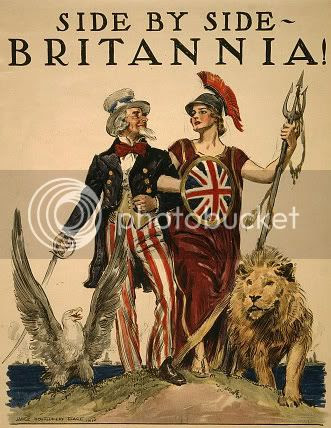