Thanks for the Memory to Lars Larson.

What the hell is this doing on the wall of a public high school in Newport, Oregon? 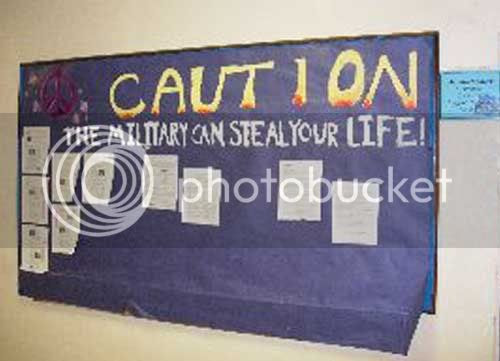 Is there an equally large display of recruiting material and accounts of the heroism of those who wear or have worn this country's uniforms? That's what I thought.

And no, don't tell me this is a Freedom of Speech issue. This is a public high school, funded by taxpayer money, and as a taxpayer, I don't particularly appreciate having my pocket picked to display such blatant hatred for our military. To steal a phrase from Billy Joel, you can speak your mind, but not on my time (or dime)!

And if the entire project was done extracirricularly, then again, I ask, has the same access to the school's walls been offered to those who support the military? If there's anyone reading this from Newport, especially a student, I'd like to know that -- is there a similar display of an opposing point of view?
Posted by B.B. at 11/30/2005 12:54:00 PM