Note: This was supposed to be posted on Tuesday, but somehow Blogger didn't get the memo. I was wondering why no one was commenting:

Multiple reasons to celebrate this weekend, beyond the good news about culinary school.

Yesterday was my birthday, so I took a vacation day and just doing whatever I wanted. TFR was very good about taking over the childcare duties for most of the day. I'm blessed to be married to her.

She gave me a couple of belts for my birthday, along with the boxed set of all three extended version LOTR movies. We watched part of Return of the King last night, making it to the lighting of the signal fires. There are still some major discrepancies that bug the heck out of me, but the extended versions are much closer to the books that the theatrical releases were.

My mother sent me a check with instructions on what to buy for myself, and it was perfect: 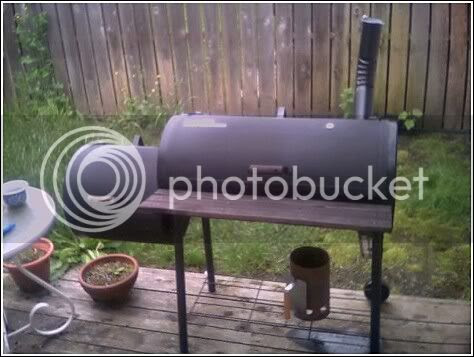 I've dubbed it "Old 97". It's not as hard core as a hand-built, competition-grade smoker, but it's a step up light years from the "R2 Unit". I bought it on Saturday and started working on it between chores, finished it and cured it yesterday, and played with cooked on it all day yesterday. TFR tried apologizing last night that I had to cook on my birthday. Sweet, misguided girl.

To add serendipity to the weekend, on Thursday I received a parcel from my mother. Included in it were some items of memorabilia that had belonged to my grandparents. Among them was a decanter that I had always admired -- cobalt blue, it was a commemorative released in 1969 on the 50th anniversary of the American Legion (my grandfather was proud of his veteran status), and originally contained bourbon. But the most prized contents of the package were my grandfathers pipes. I've loved the smell of pipe smoking since I was a boy because of him, and have wanted to inherit his pipes since I took up pipe smoking myself. Most of the pipes are currently unsmokeable -- the stems are either broken or missing, and they're just bowls. Those will eventually go on display (when I have the space and a proper place to do so), but one or two are either still smokeable or of high enough quality to be worth refurbishing.

Almost as exciting was the piece of notebook paper I found, on which was written, in my great-grandfather's handwriting, the following recipe (verbatim):

Cut fish- & Soak in Salt
Water - 1 hour. Dry off-
Oil & rub each Piece &
Put brown sugar on it-
Quite a bit. Pepper if
you like - five or more
hours- hickory chips &
Mesquite-

As luck would have it, I happened to have a smoker (see above... hehehe...), so I tried the recipe on a salmon filet and a steelhead filet yesterday while I was smoking a pork roast at hte same time. It was delicious.

Because of the decanter, I'd gone out and bought myself a small bottle of Makers Mark, and so last night I smoked my grandfather's "Missouri Meerschaum" (corncob pipe) and drank my first glass of Bourbon (on the rocks). It's good stuff, but I'm still a Scotch man.