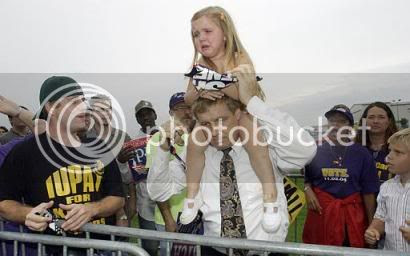 Three-year-old Sophia Parlock cries while seated on the shoulders of her father, Phil Parlock, after having their Bush-Cheney sign torn up by Kerry-Edwards supporters on Thursday, Sept. 16, 2004, at the Tri-State Airport in Huntington, W.Va. Democratic vice presidential candidate John Edwards (news - web sites) made a brief stop at the airport as he concluded his two-day bus tour to locations in West Virginia and Ohio. (AP Photo/Randy Snyder)

Thanks for the Memory to Curtis at a_sdf.

Update:
As Aaron at Free Will points out, the jerk on their right, the one who seems to be holding remnants of the sign, is wearing a Union shirt -- apparently the IUPAT, the International Union of Painters and Allied Trades. I think it reflects well on their trade, don't you?

UPDATE 1:
Thanks for the Memory to reader Kat in Missouri over at the Rottie.

Does this mean your thug will be turning himself in to the authorities?

As I've discussed before, this isn't the first time the left has acted like this. I doubt it will be the last.

UPDATE 2:
Amazing how quickly I was proven right.

Thanks for the Memory to Mr. Minority.

UPDATE 3:
Emily at It Comes in Pints? has a different conservative reaction to this, as do several readers over at the Rottie. And upon further reflection, I have to concede their point. The gentleman whose sign was torn up is a known conservative agitator, and this is the third presidential election in a row in which he's been involved in an incident like this. And it WAS irresponsible of him to take his 3-year old into the middle of a hostile crowd. And the Union thug is an aberration. Most people, even rabid supporters of one cause or the other, would not intentionally cause a child harm or trauma.

But just because he's not the norm does not mean he's necessarily the only one of his kind out there. Just look at the incidents I catalog in this post from August, or this post from Michelle Malkin today (some overlap occurs), or the link above in update 2. These "isolated incidents" start to snowball after a while.

I guess what irks me most of all is the hypocrisy of the Left, the blatant, unabashed willingness to accuse the Right of the very things they themselves do. Look at all these incidents. I've had one of my own -- admittedly not violent, but it was definitely the action of someone willing to take unethical action in order to deprive me of my freedom of expression -- and yet the daily rhetoric from the Left is about conservative being Nazis, about the threat to personal freedoms, especially freedom of expression. They do this without any sense of self-irony whatsoever, without shame, without batting an eye.